He joins a list of prominent Democrats who are moving in the right direction. But will the rest of the party listen? 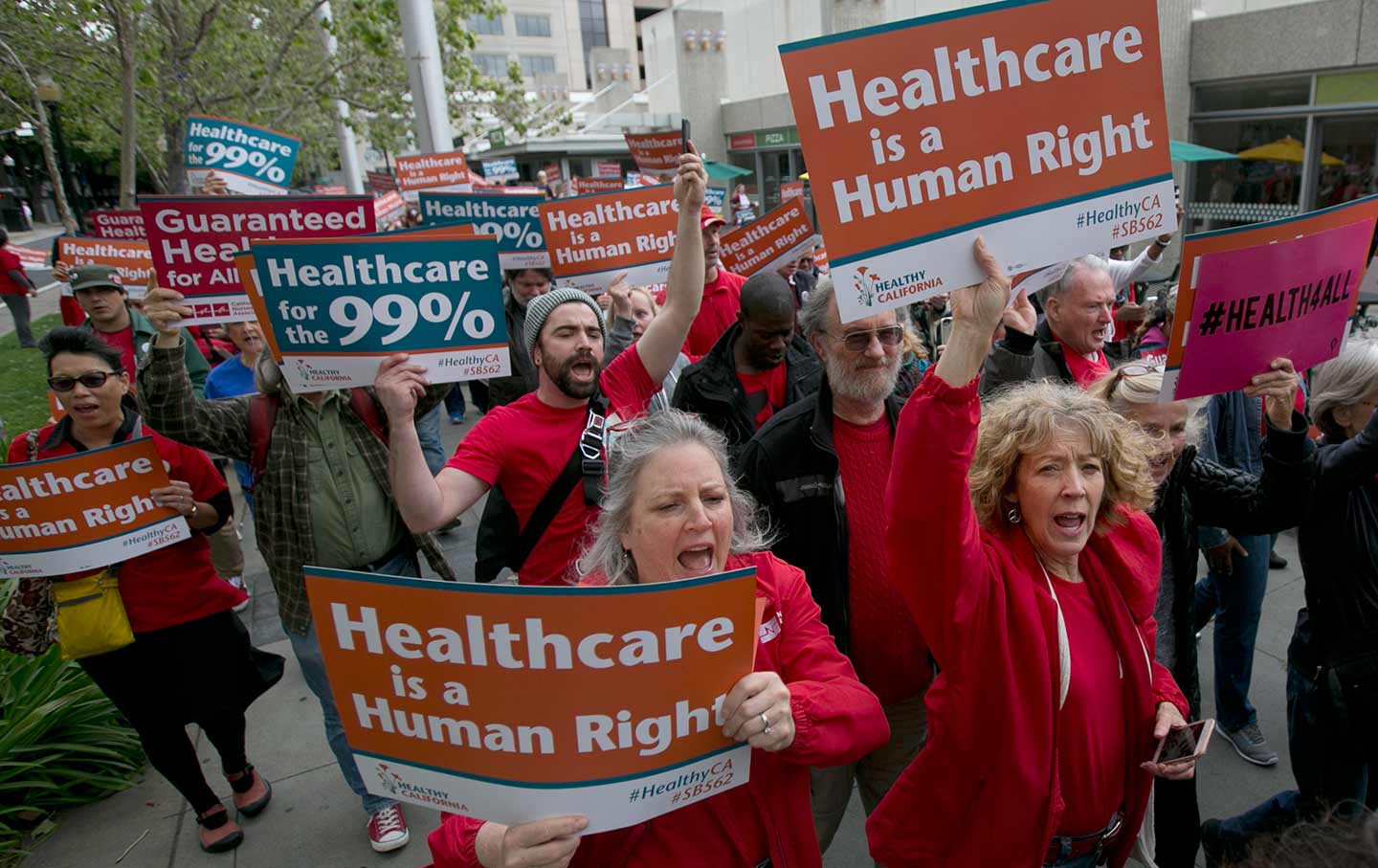 Jimmy Carter has always been a good man. But he only became a liberal icon during a post-presidency that saw the Democratic Party move steadily right on a host of fundamental issues on which the party once led. Remember that Massachusetts Senator Ted Kennedy and California Governor Jerry Brown challenged Carter in the 1980 Democratic primaries because they believed that Carter was too cautious on those issues—including health-care reform.

To be clear, even when he served as a moderate Democratic president, Carter was more progressive on many issues than a good number of today’s Democratic “leaders.” The 39th president argued in 1980 for enactment of “an affordable national health plan that will improve Medicare for the elderly, extend protection against catastrophic medical expenses to all of us, improve health coverage for the poor, and provide special benefits to expectant mothers and children in the first years of life.”

But Kennedy and others wanted Carter to go further and faster. Now Carter is there.

Last Sunday, he spoke about the inevitability of a single-payer health-care system. Carter is not some radical change agent but rather a practical political thinker who sees both the logic and the necessity of a “Medicare for All” response to the health-care challenges that America faces today and that Republicans are determined to make dramatically worse in the future.

Democrats remain divided on the question of whether to go all-in for “Medicare for All”—as Montana Republican Senator Steve Daines attempted to highlight this week by proposing an insincere amendment backing a version of single payer. Daines, a right-wing provocateur, is not a supporter of real reform; he simply wanted to get progressive Democrats and their more moderate colleagues wrangling with one another over health-care reform. His move was foiled by supporters of single payer, led by Vermont Senator Bernie Sanders, who refused to play Daines’s game. “The Democratic caucus will not participate in the Republicans’ sham process. No amendment will get a vote until we see the final legislation and know what bill we are amending,” explained a text from Sanders aide Josh Miller-Lewis. “Once Republicans show us their final bill, Sen. Sanders looks forward to getting a vote on his amendment that makes clear the Senate believes that the United States must join every major country and guarantee health care as a right, not a privilege.”

While they are united in rejecting Republican chicanery, however, Democrats have yet to get on the same page with regard to single payer—a fact frequently noted by RoseAnn DeMoro, the executive director of the 175,000-member National Nurses United union, and others who have grown frustrated with the party’s failure to embrace the “Medicare for All” option.

“I think eventually we’ll have a single-payer system.” —Jimmy Carter
Democrats should listen to Carter, as they should to the great mass of Americans who have made it clear that they want to maintain the access to health care that came with the Affordable Care Act and extend that access with an absolute guarantees of health care as a human right. That old argument for single payer, in combination for the new realities of scorching income inequality and an increasingly unstable gig economy, has made Carter and others recognize that the reform that was once morally necessary is now becoming an economic and social inevitability.

“I think eventually we’ll have a single-payer system,” Carter told a crowd of well-wishers before teaching his usual Sunday school class at Maranatha Baptist Church in his hometown of Plains, Georgia.

Noting his own recent experience with Canada’s national health-care system—the 92-year-old former president was treated at a Winnipeg hospital, after he showed signs of becoming dehydrated while working on a Habitat for Humanity project—Carter spoke in Plains about the logic of a universal single-payer system at a time when a growing number of prominent Democrats are joining Sanders making the “Medicare for All” argument.

Senator Elizabeth Warren, D-Massachusetts, has signaled that Democrats should campaign on the issue, arguing that:

President Obama tried to move us forward with health-care coverage by using a conservative model that came from one of the conservative think tanks that had been advanced by a Republican governor in Massachusetts. Now it’s time for the next step. And the next step is single payer.

New York Senator Kirsten Gillibrand has expressed similar sentiments in recent weeks, saying: “Health care should be a right, it should never be a privilege. We should have Medicare for all in this country.”

The June Kaiser Health Tracking poll found that a majority of Americans (53 percent) now favor a single-payer health plan, while just 43 percent oppose such a plan. What’s especially notable is that not just progressive Democrats but independents are turning toward a “Medicare for All” system. “Not surprisingly,” note the Kaiser analysts,

The Pew Research Center notes that support for the argument that government has a responsibility to provide health-care coverage is especially pronounced among young people under the age of 20—precisely the potential voters that Democrats will need to motivate in 2018 and in 2020.

Jimmy Carter finished his presidency before Americans who are under the age of 30 were born. But he recognizes what they recognize. This is not complicated. It is what other countries have done. It is what the United States has done for older Americans with Medicare. Now, says Carter, the next step can be taken with “the expansion of Medicare to include all ages.”

Republicans have made their opposition to that expansion clear. They seek to constrain access to health care, not just by repealing the Affordable Care Act but also by undermining programs such as Medicare and Medicaid.

Democrats need to make their support for expansion clear. Yes, they must fight now to stop the Republican assault on the Affordable Care Act. But just saying “no” to Donald Trump and Paul Ryan is an insufficient response to the challenges that now exist and to the challenges that will take shape in the future. As Congressman John Conyers, the Michigan Democrat who has sponsored H.R. 676, the Expanded And Improved Medicare for All Act, says:

In other words: It is time to listen to Jimmy Carter’s wise counsel.

John Nichols is The Nation’s national-affairs correspondent. He is the author of Horsemen of the Trumpocalypse: A Field Guide to the Most Dangerous People in America, forthcoming from Nation Books this fall, and co-author, with Robert W. McChesney, of People Get Ready: The Fight Against a Jobless Economy and a Citizenless Democracy.