Less Than 1 Percent of the Population Donates to Local Races. In Oakland, Giving Voters ‘Democracy Dollars’ Might Even the Playing Field 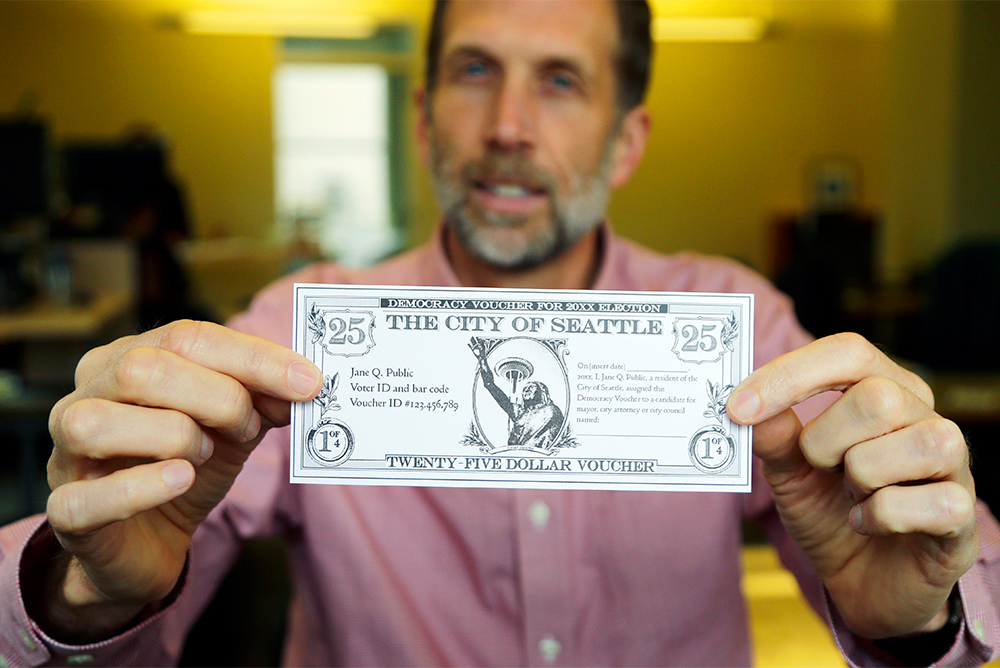 Would our democracy work better if all of us were campaign donors?

That’s the proposition posed by democracy vouchers, an idea with Seattle origins that has reached the Golden State.

This fall, voters in the city of Oakland will decide whether to distribute four vouchers, worth $25 each, to city residents ahead of future elections. Oaklanders would be free to give those vouchers to local candidates for mayor, city council, city attorney, city auditor, or school board. People could split up their vouchers among different campaigns, or give all four—the full $100—to just one candidate.

Not all campaigns could accept the vouchers. To qualify to receive the money, candidates would have to receive a certain number of traditional cash contributions. They’d also have to agree to spending limits on their campaigns. That’s something a wealthy self-funded politician (think developer and Los Angeles mayoral candidate Rick Caruso) would be unlikely to do.

But those campaigns that did participate could redeem the vouchers for real money to spend on campaign activities, from polling to lawn signs. The money would come from the city’s general fund—at an estimated cost of $4 million per election.

Democracy vouchers—or “democracy dollars,” as they’re called in Oakland—may not win on this November’s ballot. But the idea is gaining traction across California and the country because of its pragmatic “if you can’t beat them, join them” logic.

Generally, a very small number of mostly rich people—less than 1 percent of the population—donate to local political campaigns. This is the case in Oakland, too, where backers of “democracy dollars” have found that most election donations from Oakland residents come from a few wealthy neighborhoods. About half of the money doesn’t come from Oakland at all, but from people or business interests who want something from the city, but are located elsewhere. Candidates spend most of their time talking with wealthy and far-flung donors, and responding to their concerns. That doesn’t benefit most Oaklanders.

Would our democracy work better if all of us were campaign donors?

Democracy vouchers don’t challenge the dominance of money in local politics; in 2020, Oakland elections saw $5 million in donations, between candidate campaigns and independent expenditures. But they do allow regular people to get in the game, creating incentives for candidates and campaigns to go out and talk to all of us. If vouchers take off, might the concerns of everyday Californians receive more attention in our politics?

Democracy vouchers make sense in an era in which Americans are concerned—or at least pretend to be concerned—about racial equity and justice. Since Seattle pioneered democracy vouchers back in 2015, the concept has made the population of donors more representative of the city as a whole by race, income, and neighborhood. Studies also suggest it has boosted voter turnout, since voters who give vouchers are more likely to cast ballots.

Vouchers also have proven their worth in court. Attempts to reduce the influence of money in elections have run afoul of judges who rule that limits on campaign money are unconstitutional. The voucher approach—inviting the public to put money into politics—has survived legal attacks.

All of these reasons are why Oakland’s “democracy dollars” plan has drawn support from a coalition of race-oriented advocacy groups like Asian Americans Advancing Justice, civil liberties groups (such as the ACLU), and old-line good government organizations including California Common Cause and the League of Women Voters.

The next step is to build more support for the vouchers among voters and elected officials. The idea has a mixed record at the polls. In recent years, a ballot measure to establish a statewide democracy voucher system narrowly failed in Washington state. A similar measure in South Dakota won among voters, but was repealed by the Republican state legislature.

Still, the attention that those campaigns generated, along with the success in Seattle, has raised the idea’s profile, and inspired movements to enact democracy vouchers not just in Oakland but also in L.A. and San Diego.

And that’s just a start. If such vouchers work in candidate races, perhaps their uses could be expanded. Imagine if citizens could use democracy vouchers to fund signature-gathering campaigns to qualify their ideas for laws or policies as local or statewide ballot initiatives.

People present many objections to democracy vouchers, most focused on the money. Why inject more money into political campaigns, critics say—doesn’t that only produce more conflict, more polarization, more propaganda and misinformation? And why devote scarce local dollars to turning residents into campaign donors, instead of paying for essential services? Can’t systems of public finance for campaigns prop up candidates with extremist views?

These are valid questions. You might say vouchers fight fire with fire—money with money—because that’s the system we have. Democracy vouchers can’t fix the campaign systems in California or the U.S. Real fixes will require major changes to our constitutional structure.

In the meantime, what democracy vouchers can do is make those campaigns fairer, and give everyday people, and especially low-income people, a voice in our democracy that they don’t currently have.

Welcome to the donor class, everyone.