10th anniversary of Occupy movement throughout the U.S.A.

We have one demand: World Revolution —— Our one shot to give birth to a new kind of resistance—we use this revolutionary tool in the palm of our hands to start calling the shots from below. September 17th – Worldwide

(Posted by adbusters magazine at abillionpeople.org)

The following is a timeline of Occupy Wall Street (OWS), a protest which began on September 17, 2011[1] on Wall Street, the financial district of New York City and included the occupation of Zuccotti Park, where protesters established a permanent encampment. The Occupy movement splintered after NYC Mayor Bloomberg had police raid the encampment in Zuccotti Park[2] on November 15, 2011. The timeline here is limited to this particular protest during this approximate time-frame (ie., September 17 to November 15, 2011).

However, the chronology does encompass subsequent events if they are specific to both OWS and Zuccotti Park. After November 2011, various events and protests have continued at Zuccotti Park that claim to be associated with OWS. But permanent encampments, including extended protests and occupations of Zuccotti Park, are no longer permitted. 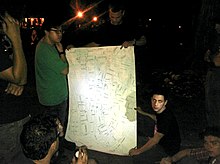 September 3, 2011: A planning session for Occupy Wall Street is held at night in Tompkins Square Park 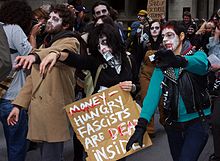 The crowd listening to Tom Morello of Rage Against the Machine on October 13, 2011

This action was taken at this time of day to reduce the risk of confrontation in the park, and to minimize disruption to the surrounding neighborhood…[Mayor Bloomberg] [has] become increasingly concerned – as had the park’s owner, Brookfield Properties – that the occupation was coming to pose a health and fire safety hazard to the protestors and to the surrounding community.[49]

Journalists have been barred from entering immediate area of eviction since the raid began, and Mayor Bloomberg cited this as a way “to protect members of the press,” and “to prevent a situation from getting worse”.[50] A CBS press helicopter was not allowed into the airspace above the park, which has been interpreted as an effort to limit media coverage of the event.[51] A judge has issued a temporary restraining order in favor of the protestors, requiring Mayor Bloomberg to show cause for eviction.[52] Mayor Bloomberg is scheduled to address the court order at 11:30am ET.[51] Occupy Wall Street’s statement released in response to the eviction cited exercising their right to assemble and the need to create a “civic space” as essential to changing public discourse.[53] The Mayor’s Office released statement addressing the complaints of protesters, including the following:

No right is absolute and with every right comes responsibilities. The First Amendment gives every New Yorker the right to speak out – but it does not give anyone the right to sleep in a park or otherwise take it over to the exclusion of others – nor does it permit anyone in our society to live outside the law. There is no ambiguity in the law here – the First Amendment protects speech – it does not protect the use of tents and sleeping bags to take over a public space (www.nyc.gov).[51]

Some media outlets report that in the process of clearing out the park, 5,554 books at The People’s Library are taken by police and stored at a sanitation facility to be picked up later by protesters.[54][55]
Other media sources report that 2800 books were destroyed by the police and that OWS eventually settled a lawsuit with the city, collecting $232K.[56] 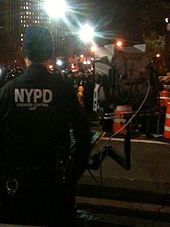 Also, an article published today in the International Business Times reported that:

In New York, the 2,644 Occupy-related arrests in 2011 resulted in 409 guilty pleas or convictions […]. The city has paid out $1.5 million to settle 80 lawsuits, with dozens more still pending. That cost doesn’t include legal fees and overtime for officers who were required to patrol streets around Zuccotti Park during the two months that it was occupied.[81
]