The fight for a free internet is not over!

As you may know, on December 14th the FCC spearheaded by former Verizon lawyer Ajit Pai voted along party lines to repeal Net Neutrality protections and attempt to bar states from enacting their own rules. Going against 83% of Americans who favored keeping a free and open internet. Though the 14th was a win for the AT&T, Verizon and Comcast, it is by no means the end of our fight. There are 3 steps to continuing the fight;

First, multiple states attorneys general, over 17 including California, have joined together in a lawsuit against the Commission to preserve the net neutrality rules. Free Press Action Fund is also moving to the sue as well, learn more and support their campaign here.

Second, more cities can invest in building their own publicly owned municipal fiber and broadband networks like Chattanooga, Tennessee has done. This local investment and control, allows not just better coverage, but also expands coverage to communities that lack access. While also allowing the public to pay less and fight to get more rules where they see fit.

Lastly, on the federal scale, we can take the fight to Congress. Demanding our representatives use the Congressional Review Act to overturn the FCC’s disastrous decision. Join Battle for the Net and call your representative today, demanding they take action here. 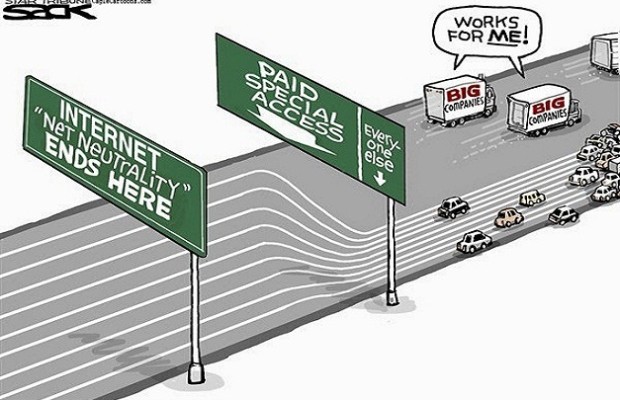 Already in California over 2 million residents, in predominantly rural communities and communities of color, lack any broadband access whatsoever. And almost 20 million receive coverage from ISPs who have track recorders of violating rules, and now have a open field because of the repeal. This repeal does not only hurt consumers, it hurts small providers who cannot compete with the Telecoms cartel.

Last Thursday’s vote was yet again another step in the corporate war on our democracy, and was bought and paid for by AT&T, Comcast and Verizon. But I am no stranger to taking on corporate giants, having fought Chevron in Richmond and won. That battle taught me that when we stand in solidarity, building corporate-free movements that fight for the 99% we can win.

As Lt. Governor of California, I will not only fight for net neutrality at the state level, but lead the charge for municipal broadband, where we control our access. My priority is expanding high quality internet access to EVERYONE, not to secure the Telecom giants monopolies.

It is your support that has grown my campaign. Already we have over 120 activists and groups ready to collect signatures to get me on the ballot and are have the most Our Revolution chapter endorsements of any campaign in the country! Every donation of $27, $50, $99 or even $270 dollars fuels our momentum for a people-powered campaign that will put the 99% before corporate profits.

Donate today and join this movement, together a better future is possible!

Click here to make a contribution of any size to my campaign that is powered by the people, not corporations and the elites!

Thank you for your support, and for being with me in this fight for net neutrality, for it is fight we must win!

Paid for by Gayle McLaughlin for California Lieutenant Governor 2018, FPPC #1396385