More than 15,000 Russians on Sunday endorsed the candidacy of Alexei Navalny, seen as the only Russian opposition leader who stands a fighting chance of challenging strongman Vladimir Putin in a March vote.

Thousands backing the charismatic 41-year-old lawyer met in 20 cities from the Pacific port of Vladivostok to Saint Petersburg in the northwest to nominate him as a candidate in the presence of electoral officials to boost his chances of contesting the March 18 ballot.

Navalny‘s campaign said more than 15,000 people endorsed him nationwide. An independent candidate needs 500 votes to get registered with election authorities, according to law.

In Moscow, over 700 people supported Navalny’s candidacy as they gathered in a huge marquee set up in a picturesque park on the snow-covered banks of the Moscow River. 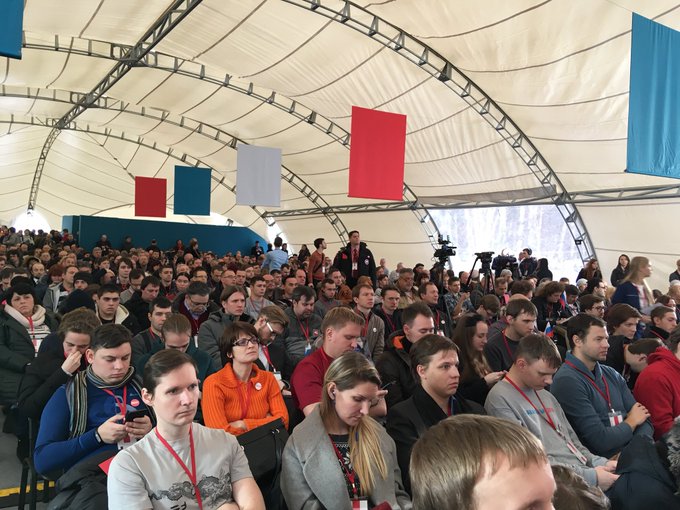 Navalny supporters who had submitted their personal details and are ready to officially endorse him. The average age is clearly over 30.

“I am hugely happy, I am proud to tell you that I stand here as a candidate of the entire Russia,” the Western-educated Navalny told supporters at the Moscow event which at times felt like a US campaign conference.

“We are ready to win and we will win these elections,” Navalny said before finishing his speech in a cloud of confetti.

Two electoral officials attended the Moscow event and Navalny’s campaign planned later Sunday to submit his nomination to the Central Election Commission, where officials will rule whether he can run.

Authorities have deemed Navalny ineligible to run due to a criminal conviction, saying “only a miracle” would help him get registered. Navalny has described the conviction as politically motivated.

Navalny said that if he is not allowed to put his name on the ballot he will contest the ban in courts and repeated his threat to call for a boycott of the polls if he did not get registered.

“Thwart the elections if they are dishonest,” he told supporters.

Putin, 65, announced this month that he will seek a fourth presidential term, which would extend his rule until 2024 and make him the longest-serving Russian leader since dictator Joseph Stalin.

Opposed by token opposition candidates, he is widely expected to sail to victory.

But with the result of the March vote a foregone conclusion, turnout could be low, harming Putin’s hopes for a clear new mandate, observers say.

Navalny, who has tapped into the anger of a younger generation who yearn for change, hopes that popular support for his Kremlin bid would pressure authorities into putting his name on the ballot.

“If Navalny is not allowed to run I am not going to vote,” pensioner Marina Kurbatskaya told AFP in Moscow. “I don’t see anyone else who I want to become president.”

Navalny has built a robust protest movement in the face of persistent harassment and jumped through multiple hoops as he campaigned across the country in an effort to shift attitudes amid widespread political ennui.

He says he is the only Russian politician who has run a genuine Western-style political campaign, stumping for votes in far-flung regions.

Many critics scoff at Navalny’s Kremlin bid but the anti-corruption blogger says he would beat Putin in a free election if he had access to state-controlled television, the main source of news for a majority of Russians.

Navalny shot to prominence as an organiser of huge anti-Putin rallies that shook Russia in 2011 and 2012 following claims of vote-rigging in parliamentary polls.

The rallies gradually died down but he has been able to breathe new life into the protest movement this year, bringing out tens of thousands of mostly young protesters onto the streets.

“We need a new president,” Alexander Semyonov, 18, told AFP in the second city of Saint Petersburg where more than 1,800 supporters backed Navalny’s bid.

“Putin is a thief,” some chanted as police looked on.

Despite a litany of problems such as corruption, poor healthcare and increasing poverty, opinion polls suggest Putin enjoys approval ratings of 80 percent.

Asked why Navalny had been barred from running, Putin – who has refused to mention him by name in public — said the opposition was hoping for a “coup” but would not succeed.