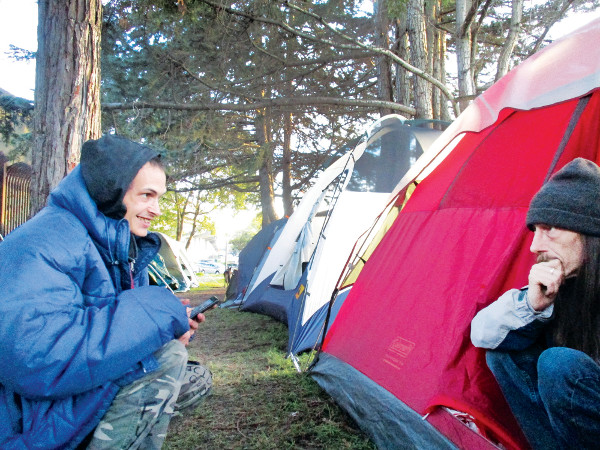 Poor Tour activists Tanis and Mike Zint in conversation. The tent protest community has been at its current location in Berkeley CA after many moves and over 15 raids. The city is now considering a proposal for a permanent tent community site and a tiny homes project.
PHOTO/SARAH MENEFEE

BERKELEY, CA — What does it take to get off the streets? Money? Affordable housing? Employment? Of course the answer is yes, but none of those things is the first step. The first step is stability. And stability is the one thing that is most commonly removed.

Every raid ‘First They Came for the Homeless’ has experienced during The Poor Tour has resulted in chaos. Not only by losing needed gear, but by losing what is known. Every raid results in the unknown. Where do we go? How do I replace what I need?

When will I get stable again?

And that is the question. And the need. During this protest, we have demonstrated the importance of stability. Even with 15 raids, theft of critical gear, medicine, and constantly being relocated, we have succeeded in helping six people become stable enough to get off the streets. We have helped two with work. We have sheltered and fed several dozen during the tour. And our budget is $0.

The government needs to take a serious look at how we have succeeded. They need to take stability seriously. They need to allow an environment where stability can exist. And that means cities need to change how they are doing things.

Step 1 is to allow the homeless tents in a sanctioned campground. A tent solves almost every issue immediately. Shelter, storage, safety, privacy, personal space, and stability. Cost is minimal.

Step 2 is to allow tiny homes, container homes, cabins, or other housing ideas that are outside the box. Perhaps giving away some of the billions of acres of publicly owned land with a cabin.

Step 3 is true affordable housing. Why is it so hard to understand that?

People say housing is a right. I strongly disagree with that. Housing is a necessity! Without housing, you die from exposure. Just like food and water is necessary to live, so is shelter. Denial of shelter is as serious as denial of food and water. That is as true as it gets!

And finally, Berkeley is a sanctuary city. But Berkeley neglects the economic refugees that sleep outside. They are everywhere, suffering. Stop their suffering by allowing them to shelter themselves.

The Poor Tour has been stable at its current location since January. Distribution of donations has begun. Food, clothing, and extra gear has been leaving almost daily to go to other groups for distribution to the homeless. Today, food not bombs will be picking up from us. Usually they just drop stuff off. Disposable free boxes will be going out to areas where homeless stay. These things are being done by the community and the homeless working together. And they are only possible because we are stable.

And our stability has accomplished something else. Jens will be leaving the tour to go back home to Germany. Stability has allowed him to get all his paperwork done and get his missing passport back. His departure time depends on his puppy’s paperwork now. A going away party is being discussed.